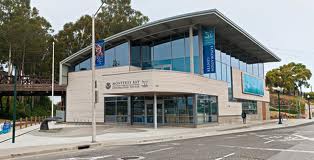 When President George H.W. Bush designated a huge area of California coastal waters are the Monterey Bay National Marine Sanctuary back in 1992, no one really knew exactly how the designation would impact life here.

Actually, one important impact was known immediately: a ban on offshoroe oil exploration here. At the time, opponents of drilling expressed surprise bordering on shock that Bush -- a longtime oil man -- would protect such a huge area, running from the waters off Marin County all the way south to San Luis Obispo county. (More on that later).

But this week -- 20 years after the sanctuary designation was announced -- the federal government and local officials completed a most important step in the evolution of the sanctuary: the opening of the Monterey Bay National Marine Sanctuary Exploration Center. The facility -- at 35 Pacific Avenue, near the Municipal Wharf -- features 7,000 square feet of exhibits. It doesn't have fish or other "squishy"' things; it instead concentrates on exhibits on concentrating on biodiversity, geology and marine conservation.

1) It lends an educational element to the Beach Area. I've long thought that environmentalism is much more than just limiting growth; it's about educating people about science and the environment. Those out in the ocean -- sailors, surfers, divers and swimmers -- already know how special and important the marine world is. Now, with all the fascinating scientific displays in the center, the offshore world is being brought even to those visitors and residents who have never event gotten their feet wet.

2) It gets Santa Cruz noticed as being an important part of Monterey Bay. Those fascinated with the undersea world know about the Monterey Bay Aquarium at Cannery Row -- and maybe other facilities like the Moss Landing Marine Laboratories.  Now, Santa Cruz has its own major destination -- the Sanctuary Exploration Center. And, this new center can also increase the visibility of another important coastal-related destination -- Long Marine Lab's Seymour Center, a facility whose exhibits feature live animals on display and one that's a great complement to the new center. Visitors to the Exploration Center just might be motivated to add the Seymour Center to their itinerary. (Note to UCSC officials: How about funding a shuttle that would connect the two facilities?

The new center was dedicated this week with all the usual pomp and speeches from various city and federal officials. One nice note: in addition to the elected officials, the ceremony also featured Bonnie Lipscomb, shown at left, Santa Cruz's executive director of economic development, whose behind-the-scenes coordination with the federal government facilitated the entire project.

Also speaking was U.S. Rep Sam Farr, who gave considerable credit to those in Santa Cruz who have supported marine conservation over the years -- former U.S. Rep. Leon Panetta, former supervisor Gary Patton, longtime activist Dan Haifley and others. Still I was amused by his downplaying of key Republicans in the process -- former U.S. Sen. Pete Wilson for one, who played a role in stopping the sale of offshore oil leases and who also worked hard in support of the sanctuary. Likewise the man who designated the large sanctuary area -- former President George H.W. Bush; Farr intimated that Bush was kind of forced into the decision and that he did so only as an election-year ploy. (Of course, Democrats never stoop to that, right?)

I mentioned the dismissal of Republicans to a politically savvy friend, and he brought up an even better strategy for Farr and the Democrats -- point to the environmental record of "old-school" Republicans like Bush and Wilson and point out how far the current-day GOP has turned its back on the environmental movement.

Hey -- all that political talk detracts from the genuinely important development that's signified by the new Exploration Center. It's an important part of Santa Cruz, of the Monterey Bay Area and even the entire Marine Sanctuary system. Federal officials have already predicted that this Exploration Center will prove to be the most-visited such spot in the entire national system.

I've received a few comments and an occasional e-mail wondering whether this website is being retired. I considered it, but I'm now rededicating efforts to keep the "lightly opinionated" site going.

Where has it been? Well, I've got to blame someone or something other than myself, so I'm going to blame Facebook. This social media whirl that we're on has a lot of pluses and minuses, but it does tend to add to the volume of our public debate. I just finished the thought-provoking book Digital Vertigo, an effort by author Andrew Keen to examine just how valuable it is to know everyone's thoughts and opinions on what amounts to a 24/7 cycle.

It seems that every minute spent on Facebook -- and on Twitter, to a lesser extent -- results in more opinions, more updates, more comments than we'd face in an entire day of old-time, mainstream media. Could more actually have become worth less? Is the constant buzz of social media updates getting in our way of thinking, considering and mulling over our opinions?

Facebook is a great venue for keeping up with old friends, but it too often has turned into an echo chamber of political talking points and shouted opinions that may or may not lead to constructive thought.

As for this blog, it started to feel like just additional noise. Sometimes, it's best to just turn off the microphone and listen and learn. And that's what I've been doing over the past few weeks.

What I've learned over these weeks is that there sure is  a lot of high volume opinionating, and maybe there is a need for moderate thinking. Maybe there is a need for occasional thoughts from someone who's non-aligned politically and philosophically. When I originally described this site as "lightly opinionated" it made sense to make it both fact-based with occasional analysis or interpretation, more as a strategy for clarity than as a desire to win over people too my point of view.  (In fact, sometimes my own point of view changes, and because I'm not running for office, I can ignore any accusations of "flip-flopping.")

It's low-decibel journalism of an independent sort. And by the way, thank you to all those who encouraged me to start back up.