One of the blessings of living in California is that the presidential race will not be close -- it's safely in the hands of President Barack Obama.

No, that's not an endorsement. Rather, I'm just commenting on  how we'll be spared the spectacle of all those attack ads on television. Those are already airing  in tossup states like Ohio, Pennsylvania and Florida. The latest attack ads from both the Obama side and the Romney side are as dreary as they are effective. Which brings to mind a column I wrote during the California gubernatorial campaign two years ago.

So I'm reproducing it here: it still rings true and it sums up how miserable this horribly negative campaign will be between now and November. It's as follows:

Two-time Democratic presidential candidate Adlai Stevenson refused to appear in televised commercial during his campaigns in 1952 and 1956 -- saying that doing so was beneath his dignity.

Too bad that Adlai's not on the ballot today. He'd get my vote.

Election season once was the political junkie's most exciting time of year. It was like draft day for the fantasy football fanatic.

Alas, no more. The barrage of television commercials is as depressing as it is offensive, with messaging and negativity aimed squarely at manipulating the least informed voters. Attack ads do two things: they make anyone running for office look greedy and/or crooked; they also effectively win elections. Alas, that's the problem. No one -- winners or losers -- emerge unscathed.

Journalist Michael Kinsley said it well when he described how what is often termed a "gaffe" by a candidate is actually one of those rare moments when he or she accidentally goes off message and tells the truth.

I've yet to see a television commercial during this campaign season that doesn't tick me off. So, in the spirit of offering an alternative, here's the script for a campaign commercial that I'd like to see. It's for any office and a candidate from either party -- or, even better, an independent.

SCENE: A candidate sits at a desk. A simple backdrop, maybe a shelf with a few books. There's no American flag (not because we don't like the flag, but we're tired of phony patriotic props.)

"Good evening, voters. I appreciate the opportunity to speak tonight, because I've decided that the professionally produced attack commercials add nothing to the public debate.

"Before I start, let me point out that my opponent is an ethical person with high standards, someone whom I respect. I do think, however, that I'm the preferable candidate, and by the time I finish this talk, I hope you'll agree.

"We have a number of challenges before us. Simply put, our government does not have the resources we need in order to satisfy everyone. In fact, governing involves knowing what NOT to do more often than embarking on new programs. Please keep in mind that few government programs benefit everyone. In fact, any new legislation carries with it the possibility of unintended consequences. So I'm not going to promise that I'll bring every one of you prosperity. I won't, because I can't.

"Our worst problems won't be easy to solve. Take crime, for example. It's horrible when anyone is victimized by a violent crime, but the reality is that crime rates are actually going down. When politicians say that they're going to be 'tough on crime,' what they're really saying is that they want your vote. They want to scare you and then offer up some ineffective program like 'Three Strikes' that ends up doing nothing more than driving up prison costs.

"Or take the pension problem. I'd love to go on and on about how irresponsible politicians have moved the state toward bankruptcy simply because they didn't stand up to the unions. That may be true, but blaming them doesn't solve the problem. The answer is to pursue legal means to reduce the costs. Unfortunately, we're going to have to cut programs in order to pay off these deals that never should have been made in the first place.

"Education. We have some major problems here. The sad reality is that public education is not producing the results that we want. Just ask any community college teacher, and she'll tell you that students are coming in without basic skills. Here again, I could blame teachers, or parents, or administrators. I'm not going to do that -- unless they continue to act as a roadblock to find solutions. Some charters schools have had dizzying success. Instead of fighting them, let's try to study what they're doing and adapt it.

"My opponent has been hollering at me on his attack ads because I'm not enthusiastically supporting everything with the word 'green' in it. Others are mad at me because I believe that global climate change is, indeed, a threat. What neither side is doing is looking toward good science. What policy will have an impact? Using nuclear power might be a better answer than having rich people drive Priuses. Are we ready to put aside our prejudices and do what's best for the environment?

"I hope you vote for me. I don't have easy answers. But I will work with anyone who has good ideas -- no matter their political affiliation. Thank you."

FINAL NOTE: I have no expectation that any candidate at any level will use this script.

The best minor-league city in America? 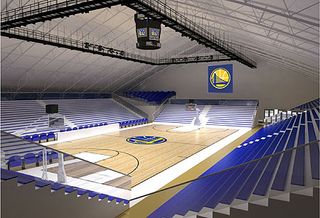 Is anyone else around Santa Cruz as surprised (and as pleased) as I am that a professional sports team is coming to town?

The arrival of the Santa Cruz Warriors minor-league basketball franchise is due at its Front Street location Dec. 23 -- an unbelievable seven-month turnaround from the time it was first proposed until the first tip-off. Of course, construction of the temporary pavilion home for the team hasn't started yet -- it's due Sept. 5, assuming the Santa Cruz City Council gives its final stamp of approval a day earlier.

Warriors' official Jim Weyerman is the man in charge of getting the team and the pavilion ready for the Dec. 23 opening, and he's spending his days meeting and greeting a variety of Santa Cruz folks as part of his outreach.

At a recent Rotary Club meeting, Weyerman enthusiastically stated his belief that the facility would be ready to go. "There is no Plan B," he said, pointing out that having an alternative is just probably a good way to make the alternative happen instead.

Negotiations between the Warriors and the city of Santa Cruz are ongoing -- as are negotiations with the Seaside Co., owners of the land. But Weyerman said he's optimistic that all parties are interested in moving the project forward.

That optimism is a sign that times are changing in Santa Cruz. This town that has unreasonably opposed varioous new facilities seems to be evolving -- particularly among younger people who are looking for more activities and even new job opportunities around town. They think having a pro sports team here is cool -- and it is.

In fact, it's more than cool. Weyerman pointed out at his Rotary talk that the new facility -- even though temporary -- will help with one of the oldest problems facing Santa Cruz: connecting the beach area with downtown. This new facility will be as important or even more important than the recently opened Monterey Bay Sanctuary Exploration Center a short way away.

Weyerman and others also visualize the potential of a permanent facility. As it stands, the pavilion will seat maybe 3,200 people and could host other events as well. Think UC Santa Cruz basketball,  the Derby Girls and even concerts. A permanent facility -- already being studied by UC Santa Cruz.-- could seat as many as 5,000.

Not everyone is happy with the proposal. Some question the cost to the city, which is assuming much of the cost of construction. However, there could be a big economic payoff, and having the Warriors' parent organization, the Golden State Warriors as a partner makes a lot of sense as well.

Already, people are quickly reserving season tickets. Weyerman says that the Warriors are ecstatic with the number of people who have already reserved tickets.