New Orleans: music, fun and food and then the Lower Ninth Ward just a short distance away

NEW ORLEANS -- They say if you're young and a conservative that have no heart -- and that if you're old and liberal you have no brain. Can the two worlds blend?

My latest Good Times column (available here)  is due out this week, and it examines the challenges from two schools of thought -- supporters of big government and supporters of market-driven forces. Often, I come down on the side of the free-marketers. But not always.

A tour around the Lower Ninth Ward here in New Orleans can open the heart of anyone. Of course, it's the non-profits and the foundations that are making a difference -- not to mention superstar Brad Pitt, whose Make It Right foundation is taking on the almost hopeless task of rebuilding. Tipitina's Foundation has helped immensely -- and rebuilt Fats Domino's house, pictured at left. Then there's the Musician's Village, another non-profit that has provided free houses to displaced New Orleans musicians. (The Ellis Marsalis Center for Music, also pictured here, is also being built. 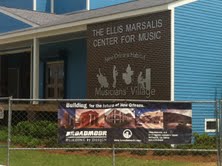 Which makes it all sound like the Lower Ninth Ward is springing back to life. It's not. Fully 80 percent of the homes are either gone -- washed away, knocked down or uninhabitable. Even if you're lucky enough to have a foundation build you a home, you wouldn't want to live there. No neighbors. No stores -- not even a convenience store. It has a Rod Serling, post-apocolypse feel to it. You can hear the wind blow.

Answers? Maybe some, but not enough. Parts of New Orleans carry on, and you can't feel too guilty about visiting here. The just-completed French Quarter Jazz Festival carried on as if there had never been a Hurricane Katrina. And visitors are welcome -- maybe like never before.

The New Orleans food, fun and music carry on. But not far away lies the Lower Ninth Ward, low-lying next to Lake Pontchartrain. Once the center of poverty, drugs and crime, it's now something wholly different -- a vast expanse with no stores, few houses and maybe one school. And that's what it'll remain for many years to come.

NEW ORLEANS -- It's possible that New Orleans is as far from Santa Cruz as you can get. Or, put another way: New Orleans is a place, unlike Santa Cruz, where the words "politically" and "correct" never get uttered together.

The weather is different here, too. Unseasonably cold in Santa Cruz; in the mid-80s here. And that's good, at least for a visit during the French Quarter Jazz Festival. This is different from the other Jazz Fest, the one that has big names like Elton John and Kid Rock. This one is all New Orleans talent. It's also all free.

Then there you are, at 11 a.m., and 80-year-old Pete Fountain, post-stroke and all, is on stage in Jackson Square, and doing a sterling job on the clarinet in an unannounced appearance with the Connie Jones Band. He sounded like the old-pro that he is, especially on standards like "Lazy River" and "When the Saints Go Marching In."

He may the last of the big-name traditional jazz players left in the Crescent City. And my is the city in love with the gentlemen. His short -- 12-minute -- set was a kind of 12-minute standing ovation.

As for the post-Katrina recovery -- it still progresses. But the city has never taken too much time to worry about its own problems. The crowds are here -- smart visitors who know about the French Quarter Jazz Festival and music-loving locals who are lining the venues in the French Quarter to revel in the sounds.

Opinion: Soda pop tax might raise some money, but it won't treat the real problem

Monning, the Carmel Democrat who represents much of Santa Cruz County in the Assembly, has the best of intentions. And maybe the plan to tax sugar drinks at the rate of a penny an ounce will raise some much-needed money. But the tax, sadly, really wouldn't do much about the problem.

The idea brings to mind H.L. Mencken's famous line:  "For every complex problem there is an answer that is clear, simple and wrong." Slapping a tax on soda pops really won't solve childhood obesity. Even if it does reduce soda consumption -- and that's far from clear -- the problem will stay with us.

Take a look at some real data. Two researchers, Sarah Anderson of Ohio State University of Public Health and Dr. Robert Whitaker of Temple University answer the following question in a recent issue of MedPage Today: Want to protect your preschooler from obesity?

Here's what they recommend:

1.Eat dinner as a family six or seven times a week.

2. Limit the time the child watches TV to less than two hours a day.

Those three things, according to research, would reduce the chance of obesity by 40 percent. Add to those, of course, getting more exercise.

Or, consider these words, from Dr. Thomas Inge, principal investigator at Cincinnati Children's Hospital Medical Center: “The reasons for weight gain are complex and multifactorial, influenced by genetics, environment, eating and physical activity habits, and society."

So how does a government address those solutions? It doesn't, at least with a simple act.  It's far easier to pick out a bad guy -- the soda pop companies -- and enact a tax. Easy answer. But not an effective one.

The political arena, sadly, is generally not the place to find sound scientific solutions. Yeah, it's probably better if children and adults alike cut down on the sugar drinks. And the soda pop tax will resonate with those who want to penalize big business. But it really wouldn't do much to solve the problem of childhood obesity.