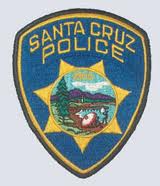 Now -- follow the crime scene in Santa Cruz on your iPhone. The Police Department has released an iPhone app to get the latest alerts, scanner calls and maps. It's free at the iTune store.

Working with two recent UC Santa Cruz grads, the PD just might be the first to offer a consumer-oriented iPhone app.

The app was designed by EZ Axess Inc. of Sunnyvale. The company was founded over a year ago by UC Santa Cruz graduates Kushyar Kasraie and Jamieson Johnson. The firm was a finalist in the 2009 UCSC Business Plan Competition, which was sponsored by the City of Santa Cruz.

A police press release says: "The mobile app will provide access to the police department’s scanner feed, online crime maps, videos, photos and a new departmental blog. In addition, consumers will be able to submit crime tips from their mobile phone and view Nixle alerts.

It all started when the PD contacted EZ Axess after reading about the company's success in creating mobile applications for college campuses. “We recognize that people are consuming information in new ways,” Chief Vogel said, “law enforcement needs to make their information as transparent and readily-accessible as possible to meet the expectations of our communities.”

A Droid app is in the works. For now, the app is available through any web-enabled phone at the PD's newly launched mobile website.

EZ Axess is in the process of expanding the development to other smartphone platforms (such as the Droid). In the meantime, the app’s features can be obtained through any web-enabled phone via the Police Department’s newly launched mobile website.

What an ugly way to spend $75 million.

You've heard of speed dating. This is speed spending.

The county Board of Supervisors -- acting in its role as the Redevelopment Agency -- moved quickly to tie up some $75 million in redevelopment funds before the state acts on a request by Gov. Jerry Brown to do away with the entire redevelopment system.

The board on Tuesday grappled with a long list of projects, most of them in the Live Oak area. The biggest tussle resulted from a proposed Sheriff-Coroner complex -- the cost of which is unknown and the location of which hasn't been decided. For the complete list, see Jason Hoppin's coverage in the Sentinel.

What's happening is that the board -- like local agencies up and down the state -- is trying to tie up redevelopment money before it goes away. Supervisor Neal Coonerty proposed his list of funds for a variety of projects, from new roads to new parks and facilities, like a new Live Oak Boys and Girls Club.

The board juggled numbers and finally reached a compromise, settling on $44 million for the new law-enforcement complex. Coonerty can be credited with the understatement of the year when he told those in attendance: "This is typically not the way we do things. ...Ordinarily we do our due diligence."

Where did they get the extra million? They cut funding entirely to the new county Economic Development Office. County Administrative Officer Susan Mauriello said she'd try to restore some of the funding out of the general fund, but made no promises.

But it sure is ugly.

With the pressure on, county supervisors will go to work on redevelopment projects

The  Santa Cruz County Board of Supervisors on Tuesday will take up the job of setting priorities to redevelopment projects -- from a new Live Oak youth center to beachfront improvements in Mid-County to even a new law-enforcement center for the Sheriff's Office. The matter is set for the board's 1:30 p.m. session.

Judging from the board's last meeting,  agreements on what to fund might be hard to come by. Supervisors are elected by district -- and they tend to watch out for their own constituency.

But the board has to move ahead -- quickly. Supervisors need to go ahead with securing as many projects as they can in the event that the state Legislature approves a plan by Gov. Jerry Brown to abolish redevelopment agencies around the state. Only projects already sent out for funding would move ahead.

Expect some aggressive horse-trading between and among supervisors.

It's unclear what to expect from the proposal for a new Sheriff's Office, presumably in Live Oak. Estimates have ranged widely as to the cost. A new report from Redevelopment Director Betsey Lynberg puts the figure in the neighborhood of $54 million.

Lynberg's report is worth reading -- it reflects all the uncertainty of the future of redevelopment. She says: "This staff report continues to be prepared during a time of great uncertainty and a rapidly changing legislative environment."

Millions of dollars are involved. And a great number of projects. The Board of Supervisors will have to come to some agreements as to what projects will be funded. It takes a 4-1 vote to proceed. With each supervisor looking out for his or her own district, that'll be a tough road.

One of the most brutal crimes in many years has been solved -- the vicious rape of a 23-year-old employee at the Kind Grind coffee shop at the Small Craft Harbor back in 2008.

Harris appeared at a large press conference at the Santa Cruz Police Department today
largely to explain that the arrest resulted from an intriguing combination of investigative techniques and science. It was a form of DNA testing called familial evidence.

Here's how it worked: The police gathered DNA evidence and then the scientists attempted to match it with convicted criminals in the state data base. That's maybe not so unusual, but this process is called "familial evidence." And as it turned out, the DNA matched with a family member of the suspects. From there, Santa Cruz detectives questioned the two possible suspects. They cleared the relative and took the suspect into custody.

Harris said it's only the second case of "familial DNA" leading to an arrest. "Science allows us to determine familial relations," she said.

Is this a case of too much big brother? Not according to Harris. At the press conference she said that science now provides a way to "exonerate the innocent as well as prosecute the guilty."