Steinbeck Festival worth a look 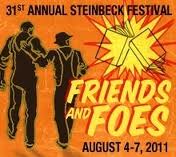 The literary event of the season is coming to the Monterey Bay Area ... in Salinas?

That's right. The annual Steinbeck Festival will be from Aug. 4-7 mostly at the National Steinbeck Center, and anyone interested in Steinbeck, the state of literature or even the future of the written word should know about it.

(FULL DISCLOSURE: I'm on the National Steinbeck Center Board of Directors. But even if I weren't this lineup for the festival would blow me away.)

Writers and researchers of all stripes will descend on the Salinas and Monterey areas for the event. Some of my favorite sessions will include:

1. "Literature + Technology -- Friend or Foe." This discussion will strike at the heart of the big issue facing book publishers, newspapers, magazines and tech.

2. Actor David Conrad will make a case for reading Steinbeck out loud in "Eye Against Ear."

3.A rare opportunity to tour the home of that other Central Coast lit figure -- Robinson Jeffers.

6. And yes -- a literary pub crawl around Cannery Row. This'll be a mix of libations and literature, as the group will bring to life the setting for the classic tales of "Cannery Row" and "Sweet Thursday."

That's just a smattering of what's being offered. Check it out here.