The media and complexity in the Middle East

Let's face it. The ever-shortening attention span of the American public is leaving most forms of the media in tatters. Exhibit A -- the Panetta Institute's presentation this week of two Middle East experts who spent 90 minutes discussing what Sylvia Panetta called "the stubborn complexity of conflict in this region."

Middle East experts Dennis Ross (who has served both Republican and Democratic administrations) and Fran Townsend (an adviser to President George W. Bush) wended through a compelling yet byzantine examination of the region.

And how could any account of 15 column inches or 28 seconds on television fairly summarize what was said.

As Ross commented to moderator Frank Sessno: "If you look at the region as a whole (from Libya all the way to Afghanistan) any  one area would be enough (to qualify as a major issue.)

Still, any trained journalist could pick out the lede: Iran's nuclear threat.

Each expert came at the issue a bit differently, with Ross citing evidence that economic sanctions just might be working. Here's why:

-- Iran's currency has been devalued by half

-- Protests in front of Iranian banks

-- Iran is finding difficulty in selling oil at a high price (despite worldwide price increases).

-- Ayatollah Ali Khamenei -- Iran's supreme leader -- is bringing in moderates to the government and has also (curiously) raised the subject that "nuclear weapons are a sin.

Despite these signs, Townsend said, the thought of nuclear weapons and a potential preemptive attack from Israel "still keeps me up at night."

So here you go. This account covers maybe one-twentieth of what was said, and so far hasn't even brought up Afghanistan, Syria, Palestinian issues, Saudi Arabia, Qatar,  Bahrain or the rest.

Maybe that's why Charlie Sheen and Lady Gaga and Tim Tebow are better covered in the media than the Middle East. But that's also why the Panetta Lecture Series is so welcome.

The next in the series will be April 9, a Monday. It'll feature a discussion on the economy with former Labor Secretary Robert Reich and former U.S. Sen. Alan Simpson. Standby tickets are sometimes available at the Panetta Institute at 831-582-4200.

Panetta lecture series and a sense of relief

It's with a sense of relief that the lecture series begins. As the chattering classes continue sticking to their rehearsed talking points, the Panetta series goes deeper. Part of the reason is that most speakers have retired from their positions -- Ross as a Mideast negotiator for both George H.W. Bush and Bill Clinton, and Townsend as chair of the Homeland Security Council under George W. Bush. That status as "former" gives them latitude to be less partisan and more informational -- more nuanced.

But it's also with a sense of sadness that the lecture series goes on. There's so little reasonable conversation about the big issues of our time -- especially during this presidential election year -- that conversations like the one scheduled Monday night get drowned out.

I'll update the account of the lecture on Tuesday morning. If you want to catch the lecture on television, it'll be on Channel 26 in Santa Cruz starting at 7 p.m. And, go here to the Panetta Institute website for a video archive of past seasons.

Cell phones and cancer -- maybe so, maybe no

It'll be on the nightly news and the front page of just about every newspaper: a panel of experts says that cell phones might cause cancer.

The reality is far different from the scare factor. So far, the best explanation I've seen is right here at Web MD.

Writer Daniel J. DeNoon says it this way: "In finding cell phones to be 'possibly carcinogenic,' the IARC (the International Agency for Research on Cancer) means that heavy cell phone use might -- or might not -- cause a specific form of brain cancer called glioma. The finding means that research is urgently needed to find out whether cell phones actually cause cancer, and how they might do it."

Here's what's tricky for news organizations reporting the story: this announcement proves nothing. It will be adopted as fact by those already convinced that weird stuff results from cell phone use. But what the content actually says is that more research is needed.

Typically, that's not how viewers and readers react. When I was editor of the Sentinel, I hated these one-off medical stories because they cause a big splash and then disappear from view. Same deal with what we used to call "disease of the day" and "medical breakthrough" stories.

Science and daily journalism often don't work well together. Sure, this development about cell phones is newsworthy. And considering how many people are yakking away on their mobiles, the issue is important.

But the news actually is that more research is needed. That headline doesn't always sell papers.

There are not many great journalists on cable news. Mark Haines, a CNBC host who died unexpectedly this week, was one of them. 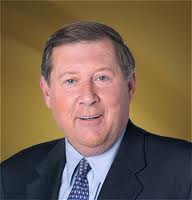 The tributes have poured in for Mr. Haines, who was one of the founding anchors of CNBC. Watching his interviews with politicians, economists and CEOs was a business education. He was smart, incisive, witty and most of all -- someone interested in getting at the truth.

For a variety of tributes, check out CNBC.com for a deep look and tributes from his colleagues. But the best example of his interview style and his ability to ask tough questions, check out this link at Forbes.com, where he mixes it up with Martin Feldstein, a Harvard economist who made the mistake of going to talking points about Obamacare. He doesn't let Dr. Feldstein off the hook. Or, there was the time that Barney Frank didn't listen to Mr. Haines' questions -- with interesting results (watch this video to the end).

Mark Haines harkens back to the early days of cable television, back when it held out hope for deeper journalism and not just partisan arguments. Watching his interviews left the viewer smarter. That's more than you can say about 95 percent of the cable television hosts.

About two weeks after the Sept. 11 attacks, I flew into New York's La Guardia Airport for a meeting. Even if I had been unaware of the tragedy, I would have known that something was wrong. Even the woman who sold me a magazine at the newsstand looked haunted.

You could hear it in people's voices. You could see fear in their eyes. A few days later I flew on the Shuttle to Washington -- and it was the same thing there. It was one of the first flights to land at Reagan National Airport. As we walked to baggage claim, there was eerie darkness, a huge presence of armed soldiers and almost no regular folks in the airport. It felt like the landing of freed hostages.

A day later, I visited friends in D.C. They told me about their emergency plans, about how husband and wife always planned how they'd find their daughter at school and whether it was wise that both of them worked.

When I returned to California, life was normal again. People laughed, joked and casually mentioned what their kids were doing or maybe a new hobby. The attacks of Sept. 11 were a world away.

Now, with the killing of bin Laden, the reaction is similarly split. Sentinel reporter Jason Hoppin got it right in today's paper when he said:  "... reactions here were more muted than the flag-waving and rapturous glee seen around the country."

I guess that's to be expected. Watching something on television from 3,000 miles away is different from experiencing the horror directly.

One of those who was on the scene was Daniel Henninger, deputy editor of The Wall Street Journal. The Journal reprinted his words today from the Sept. 12, 2001 edition of The Journal: "I think that in the next few days I am going to wish that I had not seen any of this." (He won a Pulitzer Prize for eye-witness article, right here).