One of the oldest battles around Santa Cruz revolves around the role of business -- and, even more importantly -- business development.

Here's the history. The first big success for environmentalists was the Lighthouse Field battle of the early '60s. Developers wanted to put a convention center down at Lighthouse Field, and the slowly building no-growth movement in Santa Cruz hit its stride. Through a clever mix of protest, legal action and impressive door-to-door lobbying, the environmentalist, no-growth movement in Santa Cruz took off.

Around the same time, the so-called North Coast housing development planned for the area near Western Drive was stopped -- another big no-growth success.

Those moves set in place a no-growth philosophy that has remained in place -- pretty much -- in the 40 years since. An aspect of no-growth has also been a skepticism bordering on suspicion of business interests. The resulting cliche is as follows: business interests ruin the environment and pave over our wonderful natural state -- all for their own greedy interests.

Here's the problem: economic growth does a lot of good things. Jobs, tax revenue for local cities and the county, opportunity for all ages and even a relief for the need to commute elsewhere for jobs, goods and services.

And here's another reality not always noticed: the business community has changed over the past 40 years. If you doubt it, just check out this interesting website: the Santa Cruz Business Council. This is an organization that has undergone great change over the past few months.

Once dismissed by some around Santa Cruz as a bunch of whining capitalists, the reformed council has moved mainstream into an organization that is at once interested in economic growth but also quality of  life.

The question remains: are the changes in the business community real -- or are they just hiding their greed better? More on that in the next post.

The battle is heating up over a potential desalination plant that would be built cooperatively by the the City of Santa Cruz and Soquel Creek Water District.

An active group of opponents to the plan known as Santa Cruz Desal Alternatives are well organized and active. Most recently, they called on a task force set up by the city and Soquel Creek (the task force is known as SCWD2) to appoint a "Citizen Customer Advisory Committee," although it's unclear exactly what that committee would be doing. (You can bet it won't be to help get desal built).

Paul Gratz, an anti-desal activist, read this comment to the task force: "We are all in a new participatory water supply and management era. No longer are public water agencies impervious submarines operating in splendid isolation within water silos."

I think what he means by that is "We don't want no stinkin' desal."

Actually, that's going to be the problem with the upcoming public debate. The two water departments are looking for answers to what seems to be the threat of not enough water in Santa Cruz in the years to come. The opponents really don't care what the facts say. They don't want desalination. End of story.

I can't imagine that the water departments will ever come up a study that will convince the opponents to change their mind.

Could Santa Cruz become the land of brown lawns and four-minute showers?

Will Santa Cruz someday be the home of brown lawns and four-minute showers? 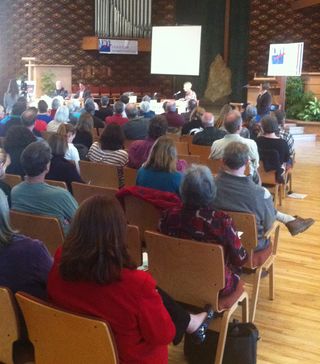 That's the vision portrayed by opponents of a desalination plant in Santa Cruz. It was the big debate Thursday night at First Congregational Church in Santa Cruz, as two advocates and two opponents of the Santa Cruz-Soquel Creek Water plan for desal locked horns.

It was low-key by Santa Cruz public-hearing standards, but opponents of desal definitely made their voice heard as the debate went through its paces. The debate comes down to this: proponents (here's their website) say it's too risky not to bring a new water supply on board before the next drought; opponents (here's their website) say water conservation would be enough.

Desal proponents were Mike Rotkin, the former mayor, and Toby Goddard, the city Water Department's main man on conservation. They say that Santa Cruz already conserves twice as much as most cities in California -- and further efforts won't be enough. The opponents were Rick Longinotti and Jan Bentley, who formerly served in the city's Water Department.

The biggest applause of the night came when Longinotti endorsed the idea of a citywide vote. But a little later he told the audience that there's nothing wrong with limiting showers to four minutes and letting lawns die.

I'm not sure that's going to win an election. Desal opponents were vocal. But if it comes down to voters, the result might be different. After all, who's going to enforce the four-minute shower?

What's the smartest option -- proceed or don't proceed? Here's what most good leaders take into account when making a decision. What's the worst that could happen? The answer is no contest: if pro-desal opponents are wrong, there'll still be plenty of water. That's good. If anti-desal people are wrong -- the lack of water causes a whole host of problems. That's not good.